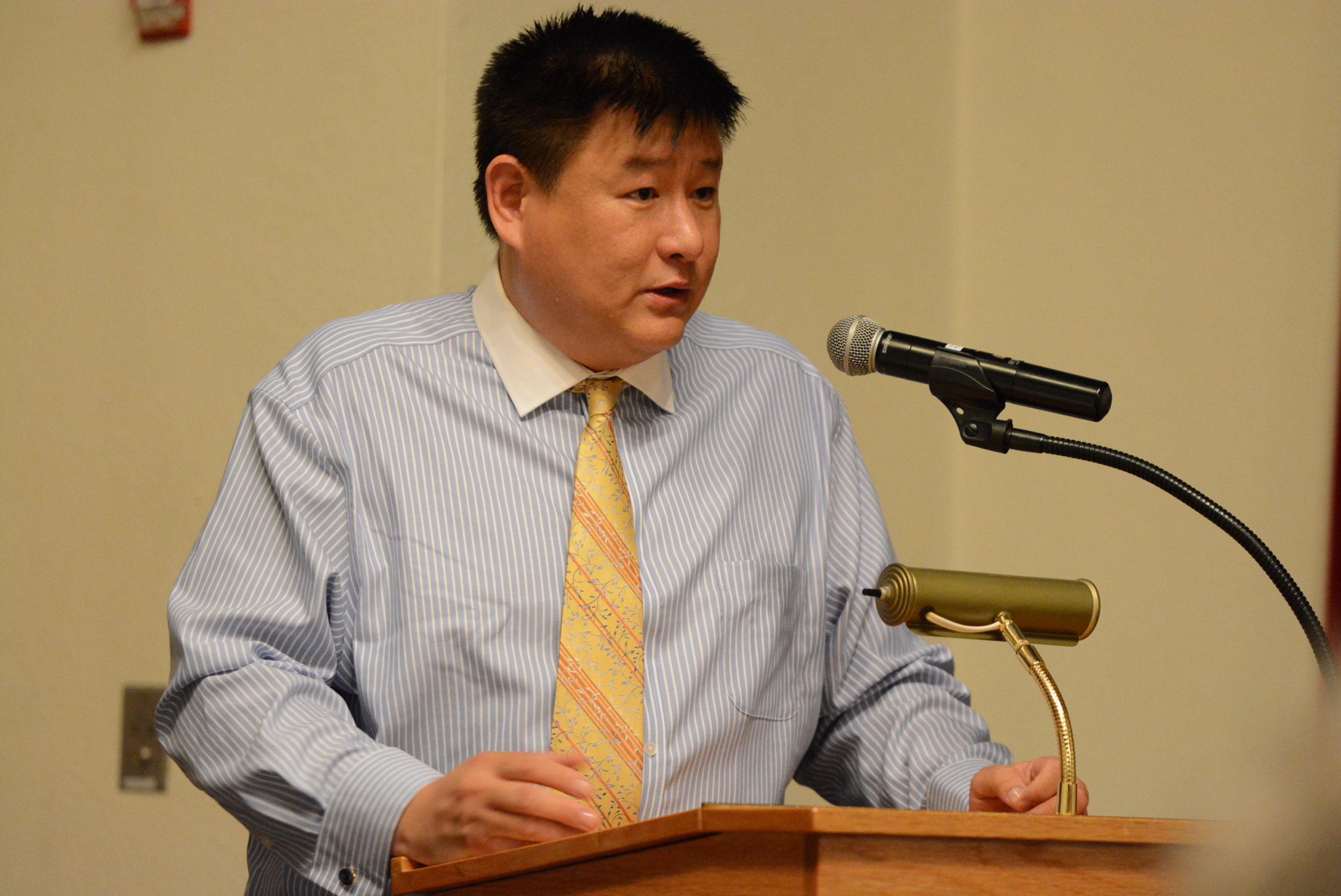 James Wu, who is challenging Mayor Pedram Bral, faced questions over campaign finance violations related to a race in Queens at a campaign forum Tuesday night. (Photo by Janelle Clausen)

James Wu, who is running for mayor in the Village of Great Neck against Pedram Bral, faced questions over campaign finance violations from his 2009 run for a Queens City Council seat at a “Meet the Candidates” forum on Tuesday night.

Wu was hit in 2013 with $17,792 in penalties by the New York City Campaign Finance Board for 10 violations, including $4,842 for “accepting three over-the-limit contributions,” $6,600 for “accepting a contribution from a corporation,” and $5,000 for “intentionally furnishing false documentation and information.”

“It’s over a loan my brother [Thomas Wu] gave me for the campaign … It’s a loan it was filed incorrectly,” Wu said. “It’s basically defined in accounting terms as an advance versus a loan. That’s the reason it was penalized. It’s an accounting error.”

The penalties remain unpaid, according to the New York City Campaign Finance Board.

While the $20,030 was repaid, according to the board, there was a $4,092 outstanding balance, which in turn is considered a contribution that exceeds the limit by exactly that amount.

This loan was also related to the $5,000 charge regarding documentation. The board said that the campaign “misreported the date, amount and nature” of Thomas Wu’s advance and “issued repayments to him in the incorrect amount.”

“By failing to report the advance, and instead reporting and submitting documentation of a non-existent ‘loan,’ the campaign intentionally furnished false documentation and information that materially misrepresented the totality of the Campaign’s expenditures,” the board reported.

One of the three people questioning Wu over the fines at Tuesday night’s event outlined the 10 charges, asking if it would be fair to consider them “minor.”

Wu said, “Almost every one of those fines attaches” to his brother. The over-the-limit contribution had to do with his brother’s loan and how it was counted, he said.

The $6,600 fine for a corporate contribution stemmed from Wu deciding to terminate a campaign consultant for not doing enough for the campaign, he said, but the method of termination “did not comply properly” with regulations and thus $6,600 was counted against him.

“That was not actually money that was given to the campaign,” Wu said. “It was for nonexistent work.”

According to board documents, the campaign signed an agreement with Sheinkopf LTD, which required payment of an $11,000 retainer. An invoice showed $5,500 outstanding and a separate $850 liability, according to the board, leading to the $6,350 outstanding being considered “an in-kind contribution.”

There was also a donation from Paypal to a bank account that “wasn’t filed properly,” Wu said.

Readers Write: James Wu does not come to the table with clean hands
Next Article